I got to spend an afternoon at the Ohio Veteran’s Memorial Park with my Grandfather, a decorated WWII Veteran.  Before sitting down to dinner at the 356th Fighter Group Restaurant in North Canton, we took some time to walk through this amazing Memorial Park in Clinton Ohio.

One of the most amazing sites at this Memorial Park in Clinton Ohio is the Ohio Vietnam Veterans’ Memorial Wall.  An amazing 125 foot long black granite wall on which is engraved with the names of 3,094 men and 1 woman, from Ohio, who lost their lives in Southeast Asia during the Vietnam War.  This memorial wall is the largest freestanding monument in the USA.

Emblazoned at the top of the wall is the phrase “Lest We Forget” in shining gold letters. The Ohio Veterans’ Memorial Park “has undertaken the task to help insure that our veterans will always be remembered for the heroism and bravery.”

On the back of this wall you will find several engraved panels displaying all of the wars that have had soldiers from the state of Ohio, beginning with the War of 1812 up to the current war in Afghanistan and Iraq.

Standing watch over the wall is the seven foot tall granite Gold Star Mother statue.  In her arms she holds the folded flag of the United States of America.  The statute is “dedicated to all of the mothers and families who have lost a child that was serving our country during both peacetime and war.” 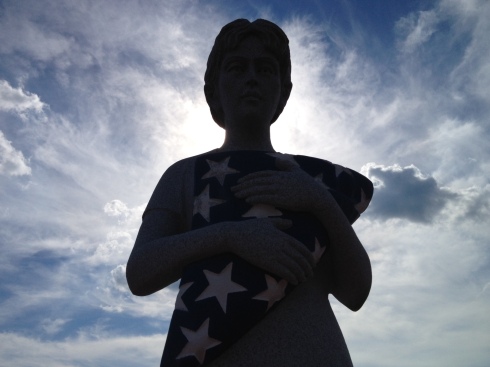 One of most beautiful areas of the park is The POW/MIA Reflection Pond and Eternal Flame.  Dedicated on November 13th, 2010, it is located to the right of The Ohio Vietnam Veterans’ Memorial Wall. 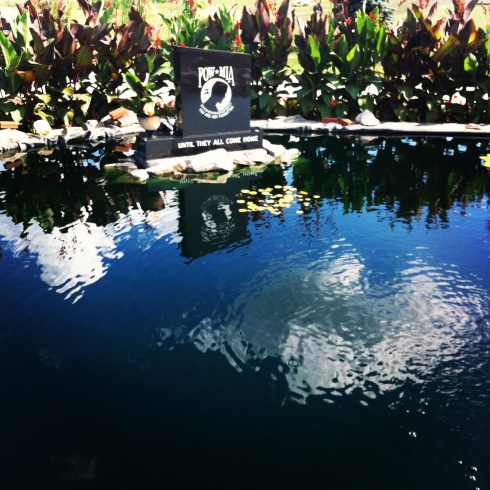 “This monument is made up of a large sitting area that will be surrounded by benches, a four tier waterfall, a walkway, a fifty foot wide pond, a black granite POW/MIA monument, an inverted Vietnam War helmet with the eternal flame and a cast steel POW/MIA seal generously donated by Rolling Thunder, and the black granite backing wall (installation date to be announced).”

My Grandfather, Carl Will at the POW/MIA Reflection Pond

We were also very happy to present my Grandfather with a personalized brick within the Air Force walkway.  His son (my late uncle) served in the Army during the Vietnam War.  At my Grandfather’s request, their bricks have been placed alongside each other.  It was an honor to spend the afternoon with my Grandfather and ask him about his experiences in Europe and the Pacific.  My grandfather mentioned that he would like to visit Pantanella Italy and the memorial to his old plane’s crash site in the Czech Republic.  I told him that if he was up to make the flight to Europe, then I would join him.

My Grandfather and Uncle honored.

We were very impressed with the Ohio Veterans’ Memorial Park.  It is within a very beautiful and serene setting in Clinton Ohio.  The kind people that run the Memorial Park have a great vision for the future of the Park and I look forward to returning in the future to see all of the addition of the granite wall behind the POW/MIA Reflection Pond.  To visit their site, check out www.ovmp.org.

68th Anniversary of the Crash of B-24 “Little Lulu”

The B-24H 42-52479 “Little Lulu” (“Red J”) from the 776th BS, piloted by 2nd Lt. John H. James was shot down on August 24, 1944 after successful bombing of the David Fanto refinery in Pardubice, Czech Republic. On the way home, the ship was attacked by Uffz. Willi Reschke of I./JG 302. Sixty years later Mr. Reschke wrote: “I selected a B-24 and closed in on it from the rear with a clear height advantage. I opened fire, primarily aiming to disable the tail gunner, streaming his bursts towards me. My second burst hit the inboard port engine which immediately started to burn. At that moment my engine had been hit by several rounds, so I had to break my attack.”  The bomber was then finished by Fw. Hubert Engst of II.(Sturm)/JG 300. Engst’s plane was severely hit too and he had to bail out.

Radio operator Sgt John F. D’Amore was the only survivor of Little Lulu. Lt. James and other eight men perished in their plane

when it crashed about two hundred yards north of the village of Vlcice, Czech Republic. (Source: Jiri Sasek)

August 1, 1943:  A very memorable date for the US Army Air Corps, for which five Congressional Medals of Honor were awarded.  It was on this day that the 9th AF carried out “Operation Tidal Wave”.  This mission was a daylight bombing raid on the Ploesti oil refineries in Romania.  These oil refineries produced a third of the petroleum needed to supply the Nazi war efforts.  The plan was to sent 178 B-24 Liberators on a 2400 mile roundtrip journey towards the oil refineries of Ploesti.  Flying at an altitude of 1800 feet, the intent was to fly under the Nazi radar, avoid antiaircraft fire and hit the enemy’s oil supply with accurate bombing.  Unfortunately the mission was plagued with technical and communication problems.  Several of the Liberators had technical trouble and either crashed after taking off or had to return.  The remainder of the formation was split up due to miscommunication because of radio silence. This error caused some of the Liberators to head towards Bucharest, the headquarters of the German air force command. .  By the time that their heading was corrected, it was already to late.  The Germans were alerted and the element of surprise was lost.  As the formation approached Ploesti, the first wave of Liberators attacked from the most heavily protected  direction.  The second wave of bombers had to endure the onslaught of delayed action bombs, flak and small arms.  Although loses during “Operation Tidal Wave” were heavy, by the end of the attack, 40% of the oil-producing capacity of Ploesti was destroyed.  Within six months, Nazi slave labor had repaired the damage inflicted by the raid, and Ploesti was back to normal capacity.

Also on August 1, 1943, the 464th Bombardment Group was activated in Wendover Field, Utah.  As part of the 15th AF, the group arrived at its base in Pocatello Idaho on October 2, 1943.  By March 9, 1944, the first aircraft and crew arrived at Oudna.  After some training there, the group flew to their temporary base at Gioia del Cole Italy in April of 1944.  Their first combat mission occurred by the end of that April with the Marshaling Yards at Castel Maggiore being their first combat target.  It was on June 1, 1944 that the 464th BG moved to their permanent base at Pantanella Italy.  Eight months after “Operation Tidal Wave”, the Allied forces were ready to attack Ploesti again, this time from the newly added bases in Italy.  The new attempt was a single raid at a larger scale at a higher altitude and with fighter cover part of the way in.  The daylight bombing raids on Ploesti was full of flak and smoke. Over 2000 smoke pots helped mask the bombers’ targets, making accurate bombing almost impossible.  The 464th pressed on continued to play an important role in several oil refinery bombings, ultimately slowing down the Nazi war machine.   Such bombings also include the Concordia Vega refinery on May 18, 1944, the oil refinery at Vienna on July 8, 1944, and the Paradubice oil refinery on August 24, 1944.  The 464th BG sometimes assisted in support of Allied Forces and interdictory operations, such as the “Operation Dragoon” invasion of Southern France in August of 1944.  They also assisted the advance of Russian troops in southeastern Europe by bombing railroad centers in March of 1945.  The 464th BG assisted the advance of the US 5th and British 8th Army in northern Italy in April of 1945 by bombing enemy supply lines.  The lineage of the 464th Bombardment Group (Heavy) is listed below.